This Blog should be called the 'thrifty gamer', but I expect that's taken so instead I figured I'd try and bestow some of my cheapness to others instead. And I do mean that, cheapness.

Theres a significant difference between cutting costs, and going cheap. Cost cutting to me will mean sacrificing premium purchases until necessary. Cheap means substitutes! This means Ebay'd miniatures instead of full-price ones, proxies instead of bespoke, and cooking materials instead of terrain materials.

Ideally in all of this, you won't notice too much of a difference, and your tabletop opponents aren't likely to either, in fact more people comment on the good look of the snow, and then are pleasantly surprised by its cost.

So lets get started, first up, an example of what this effect results in.

Good for troops; Crisp snow, not tinted with blue or with reflective particles, its hardwearing on bases and doesn't flake or chip or turn to dust easily.

You can contour the snow to be bumpy; 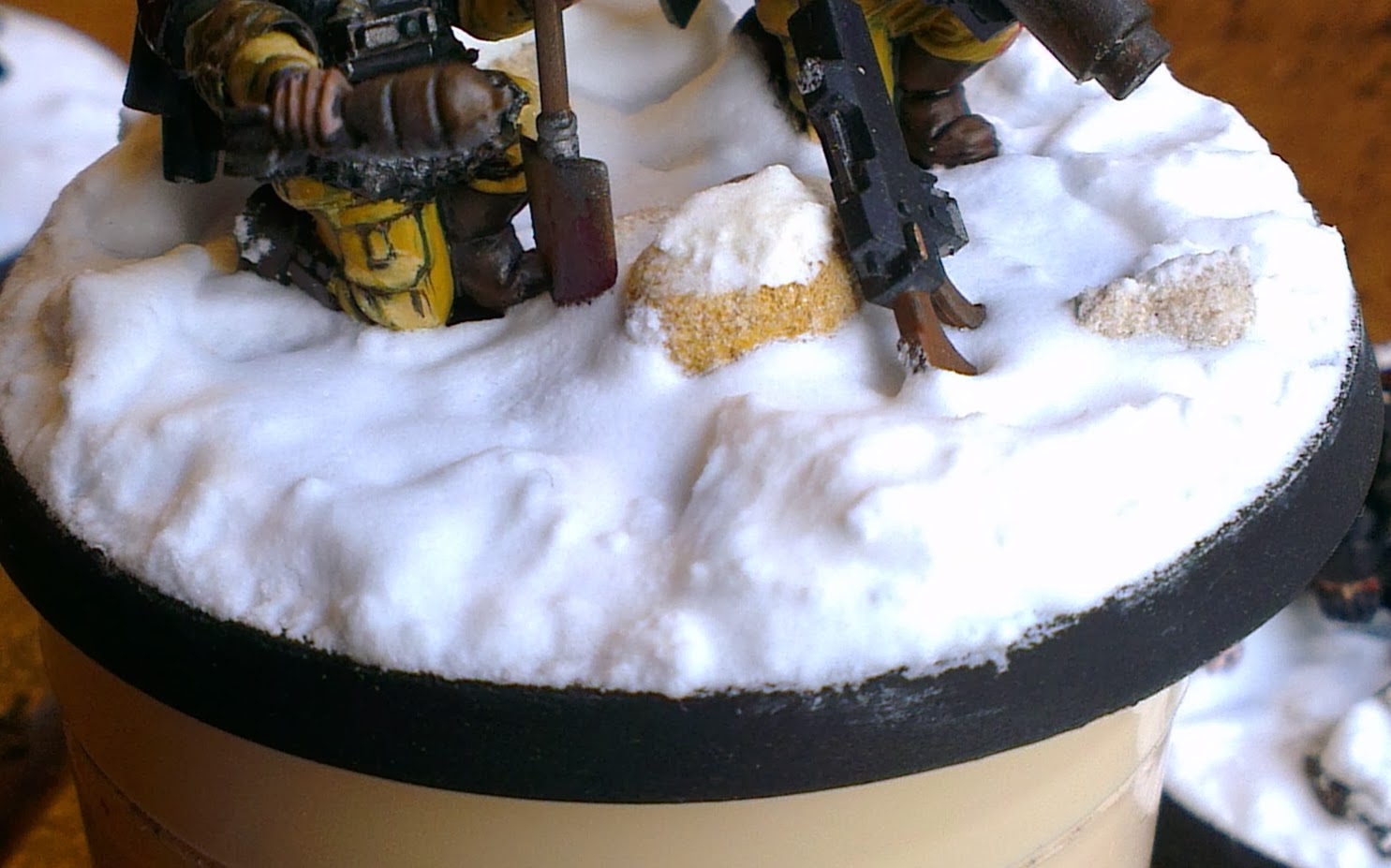 It can be changed to whichever depth you like; 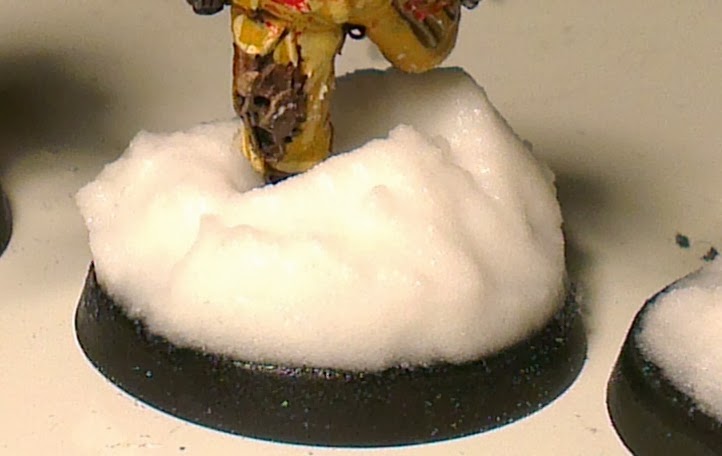 It can be applied to the clothing of camo units with ease.

Can have stuff easily embedded for realism 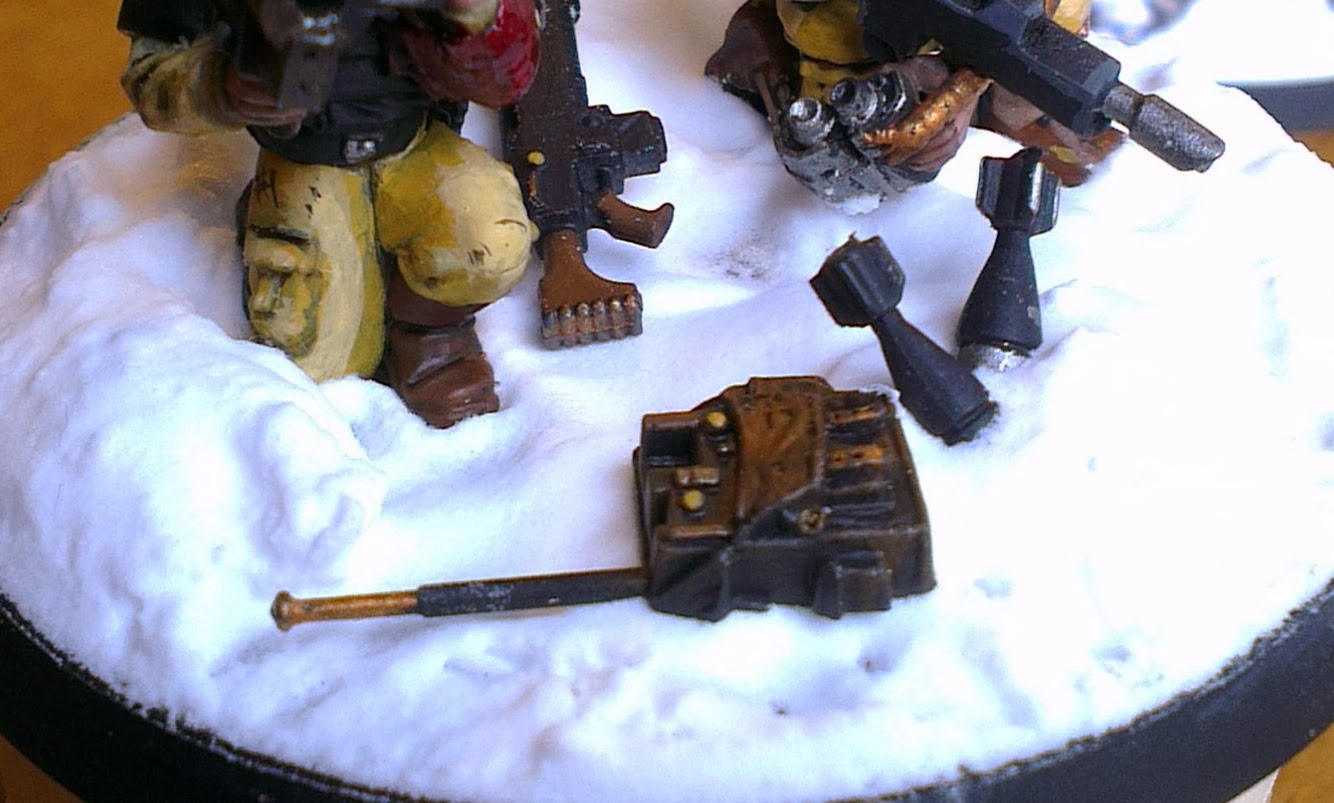 Good for terrain; the pure whiteness can also really solidify the building and makes the base feel more solid and rounded, it can seal cracks and cover up blemishes that you might have missed. Good for retroactive correction. 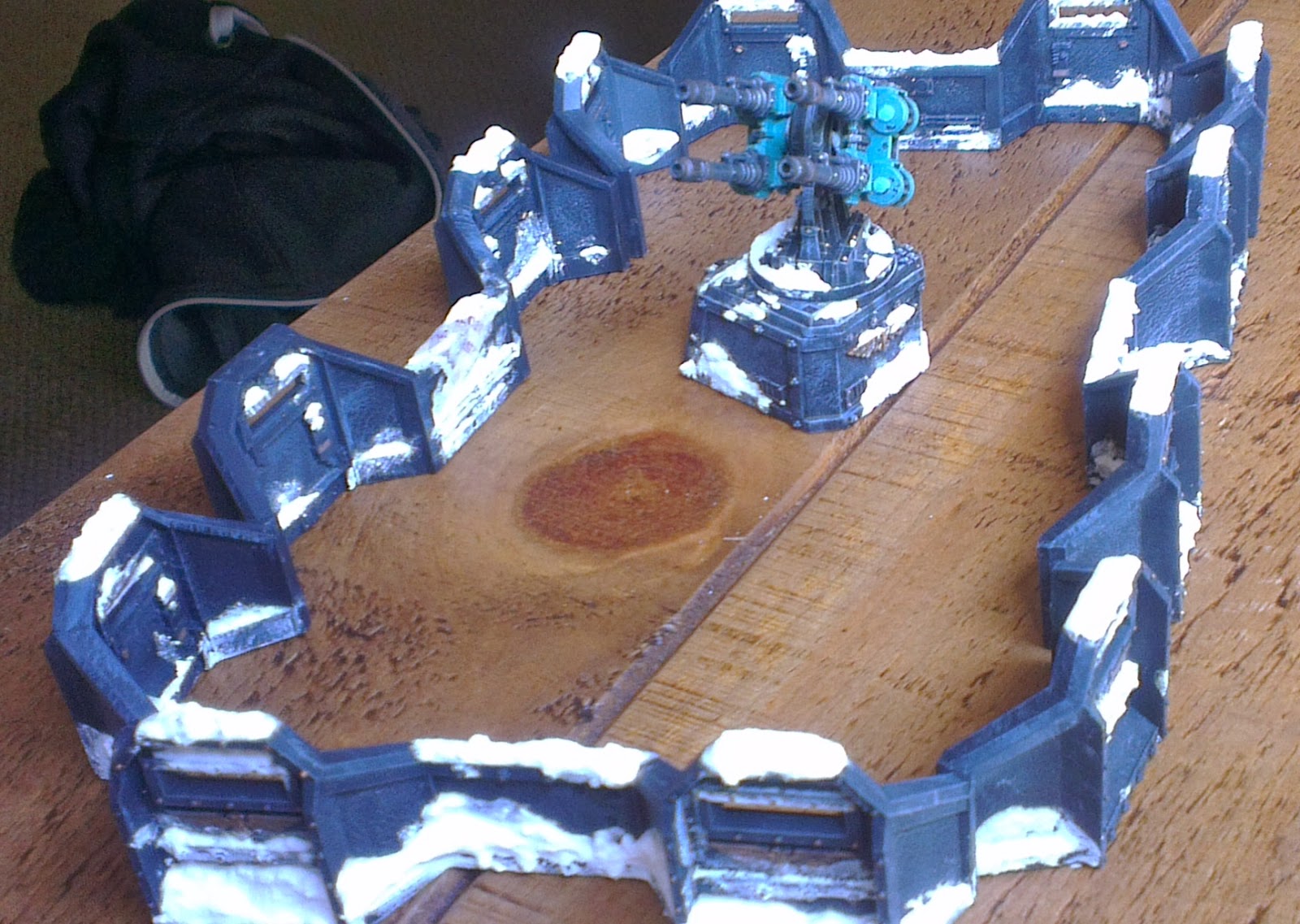 Can be 'sloshed on' rather liberally to large surface areas 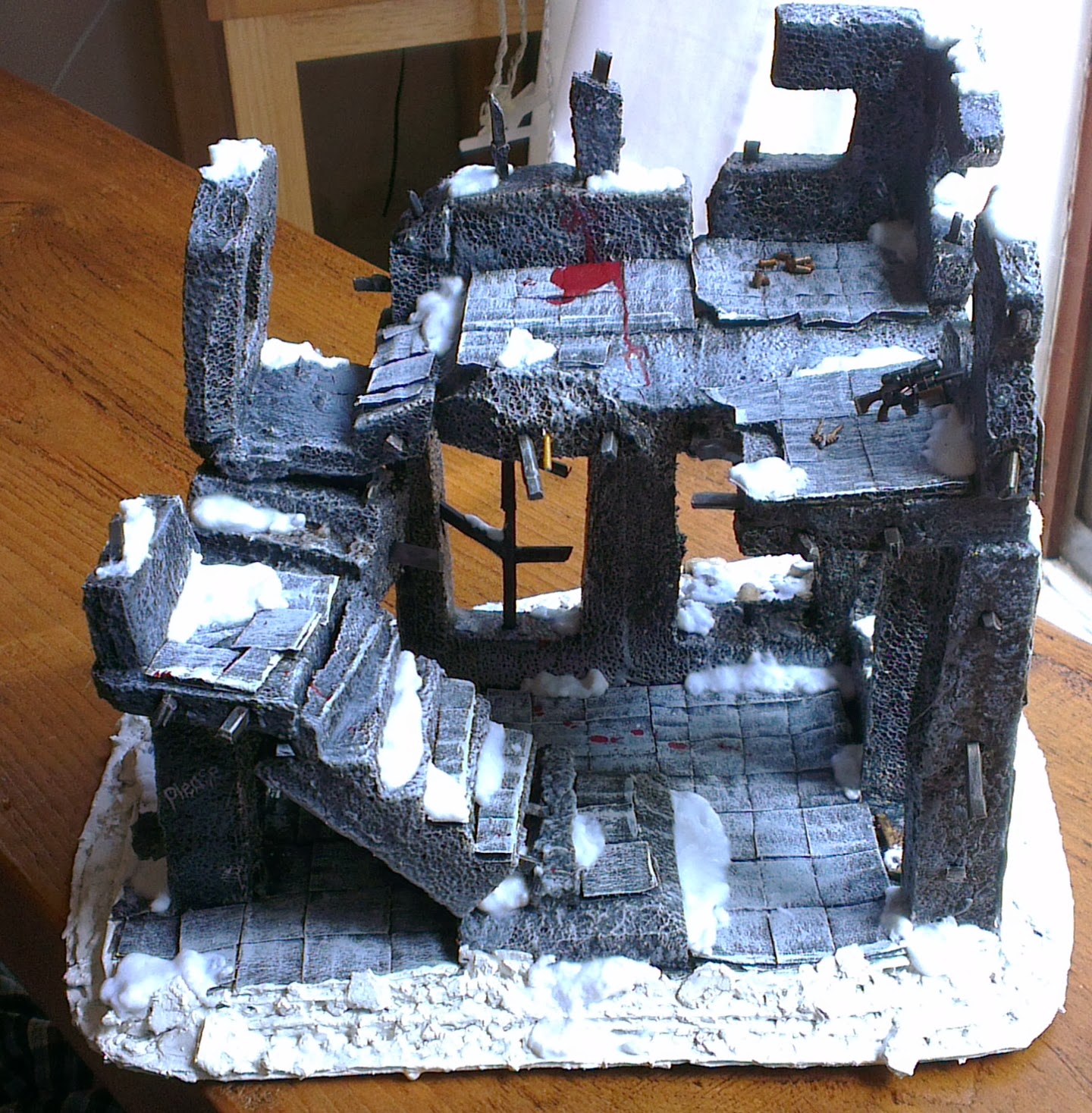 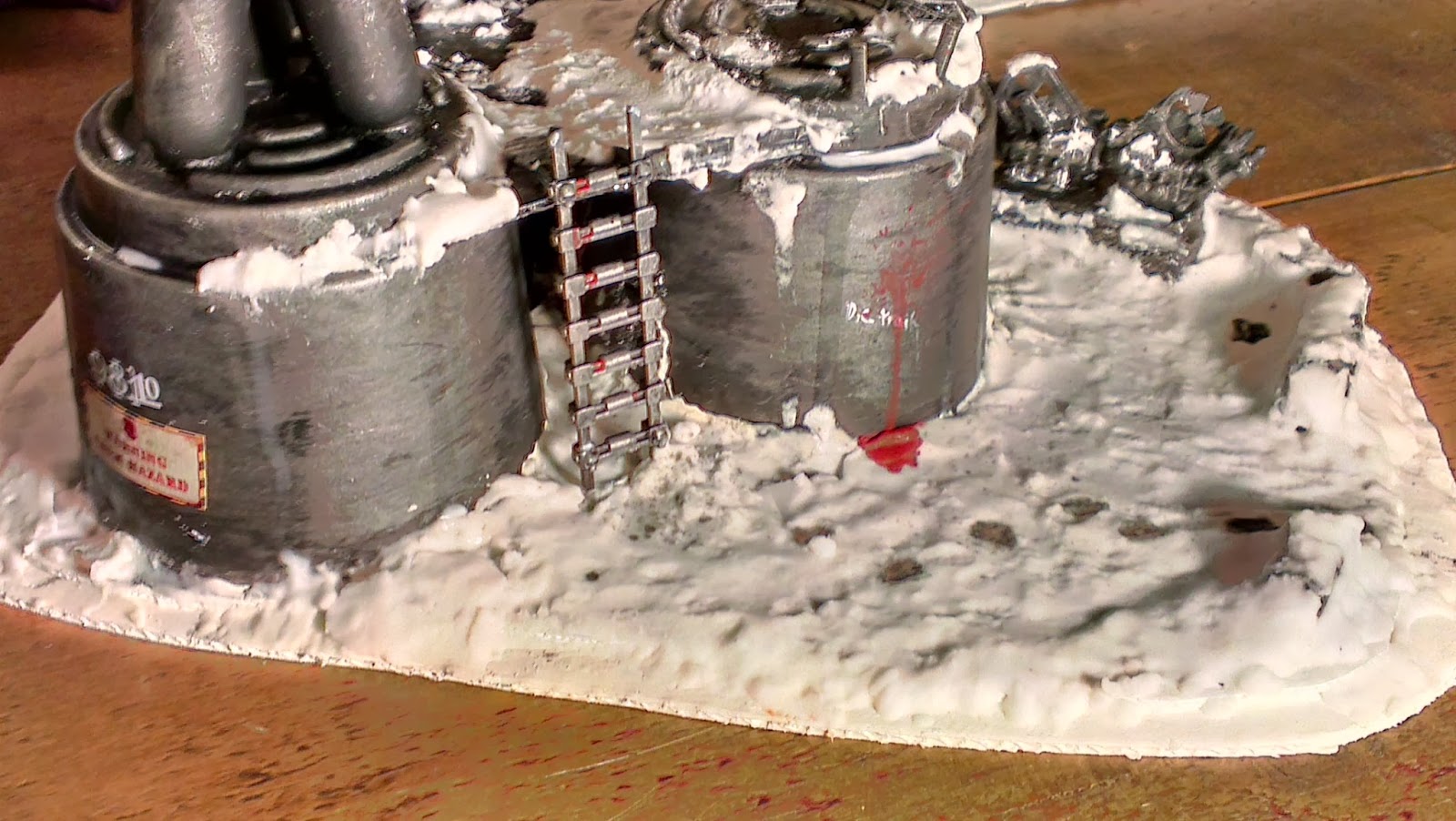 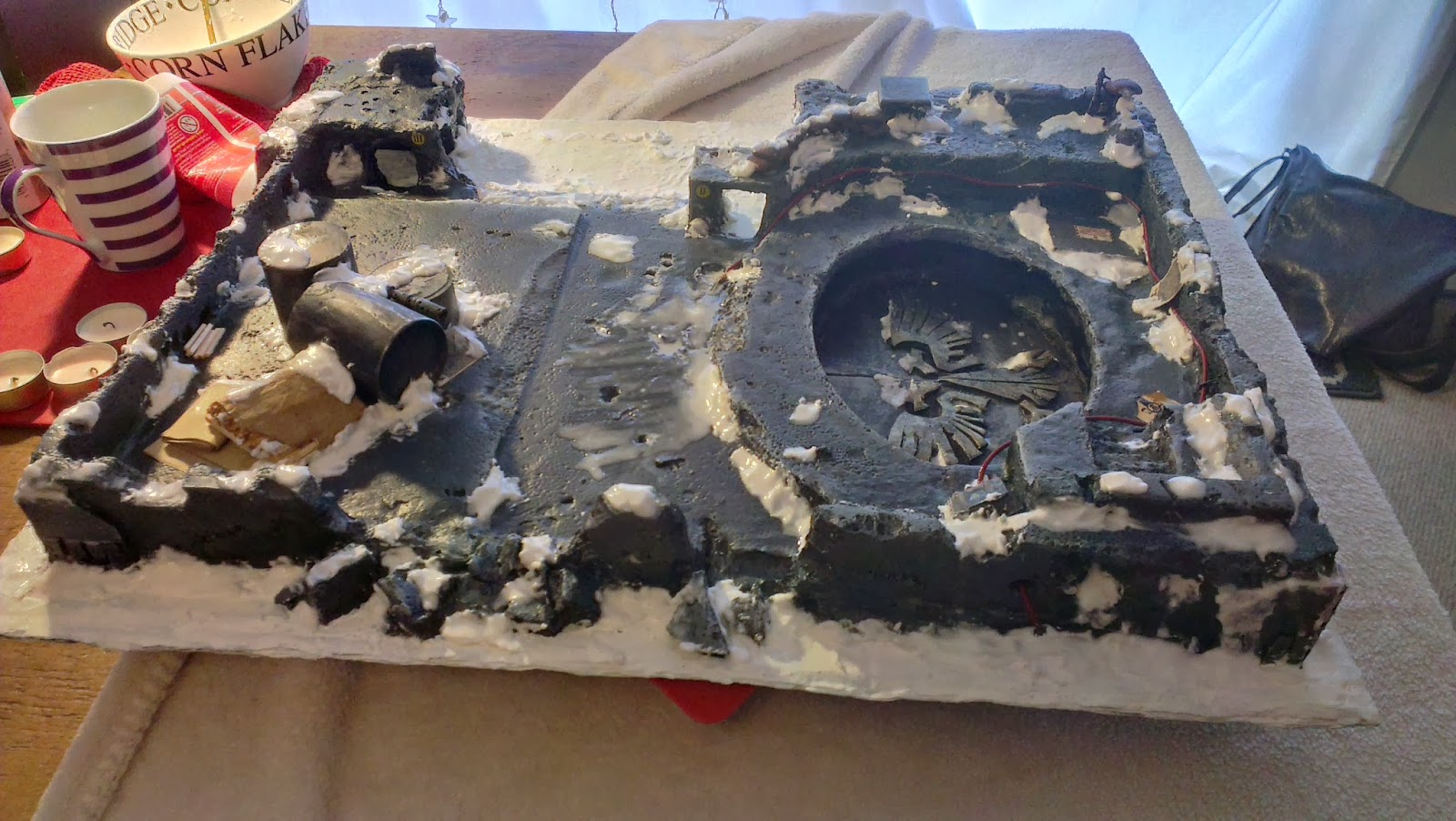 Good for vehicles, specifically around tracks (one of the main reasons that I picked snow was to be bedded into the tracks of vehicles and around their mudguards. Its actually easier to apply to a vehicle than it is to apply to a squad of guys. 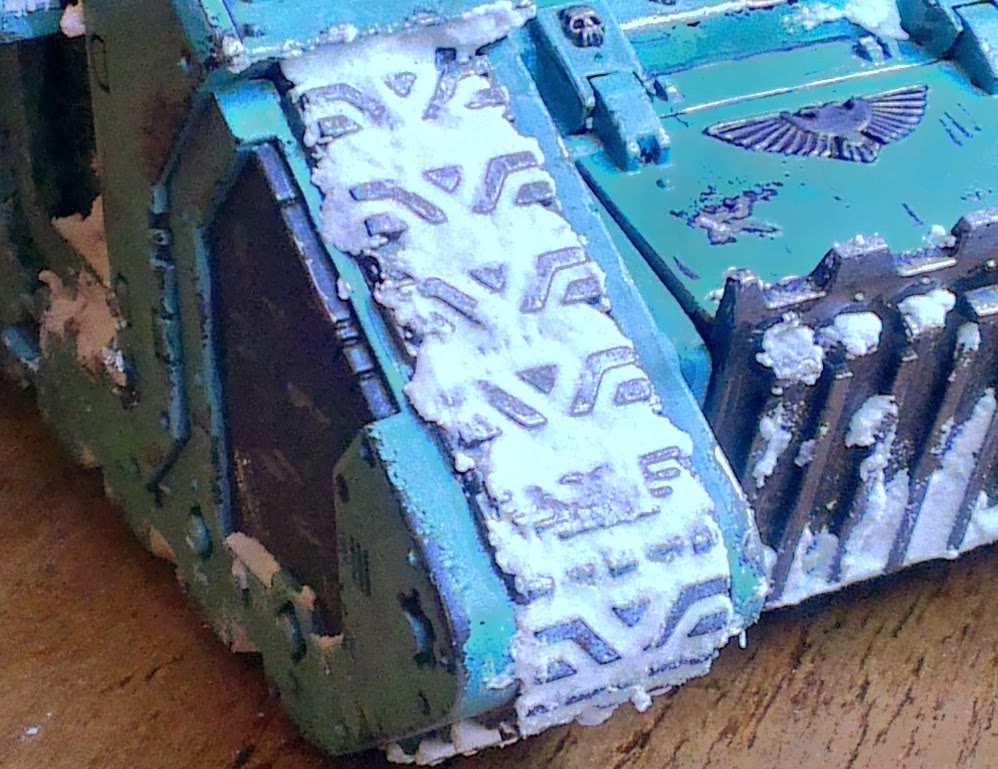 (As I've said before, other options might be preferable for other people, the one that swayed me to this method was the GW Snow basing kit. Its a fair start, it can work nicely in very small doses but it does have one fatal flaw. Flock strands. I mean the actual look of the individual flakes of flock when they adhere by themselves. They don't look like snow to me. See example below;) 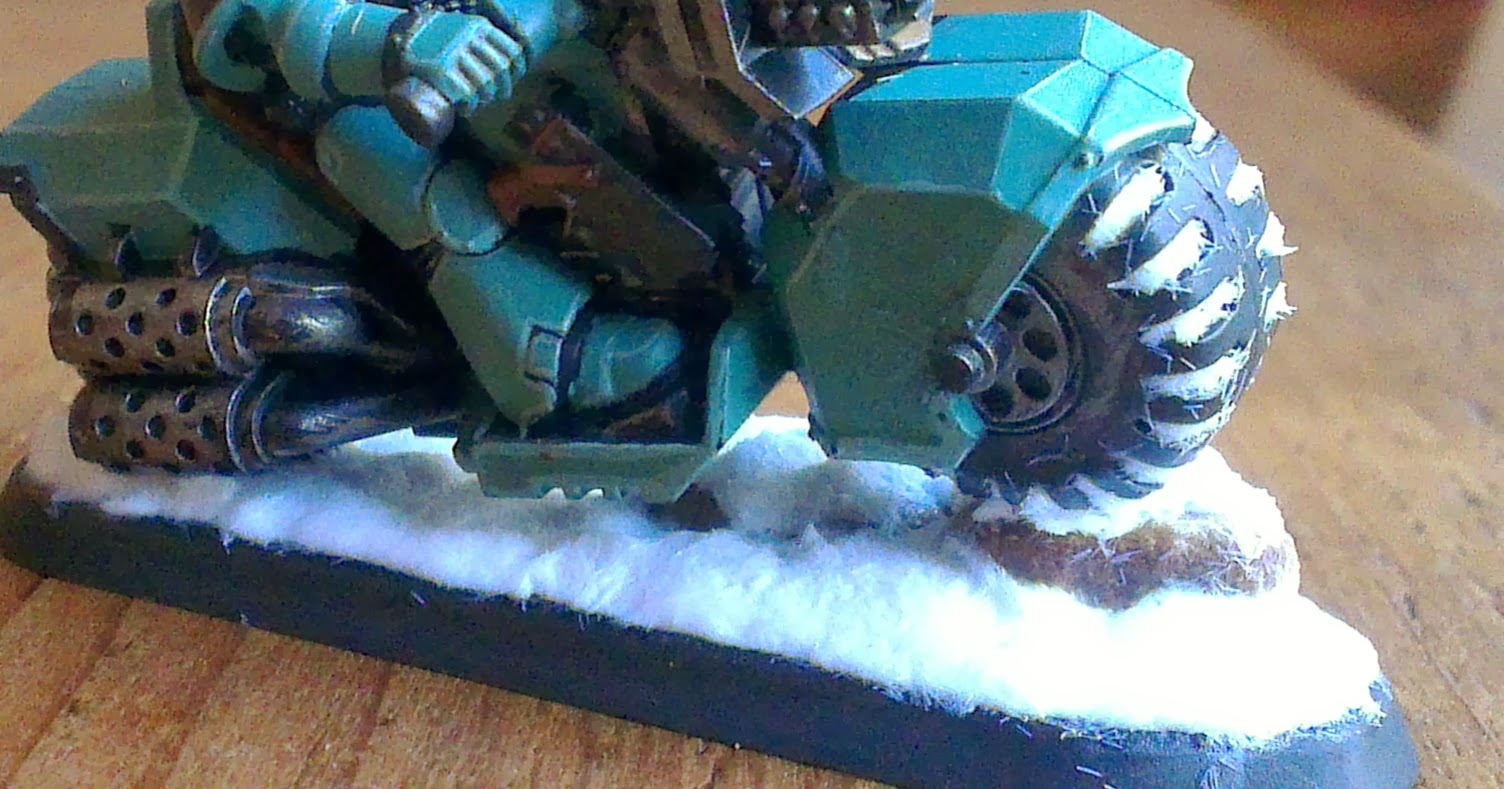 You can see where the flakes have fallen over the treads of the tyres and it looks messy compared to the above.

Good for covering up mistakes/poor construction; 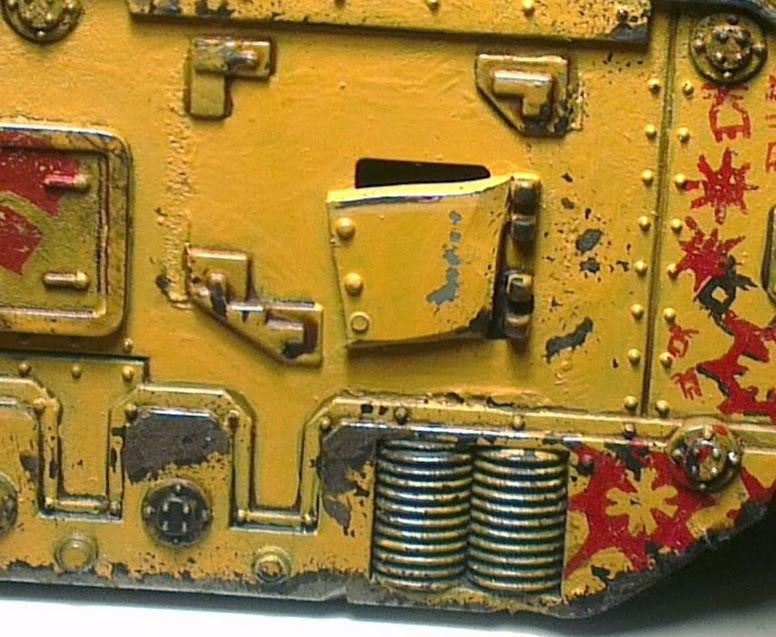 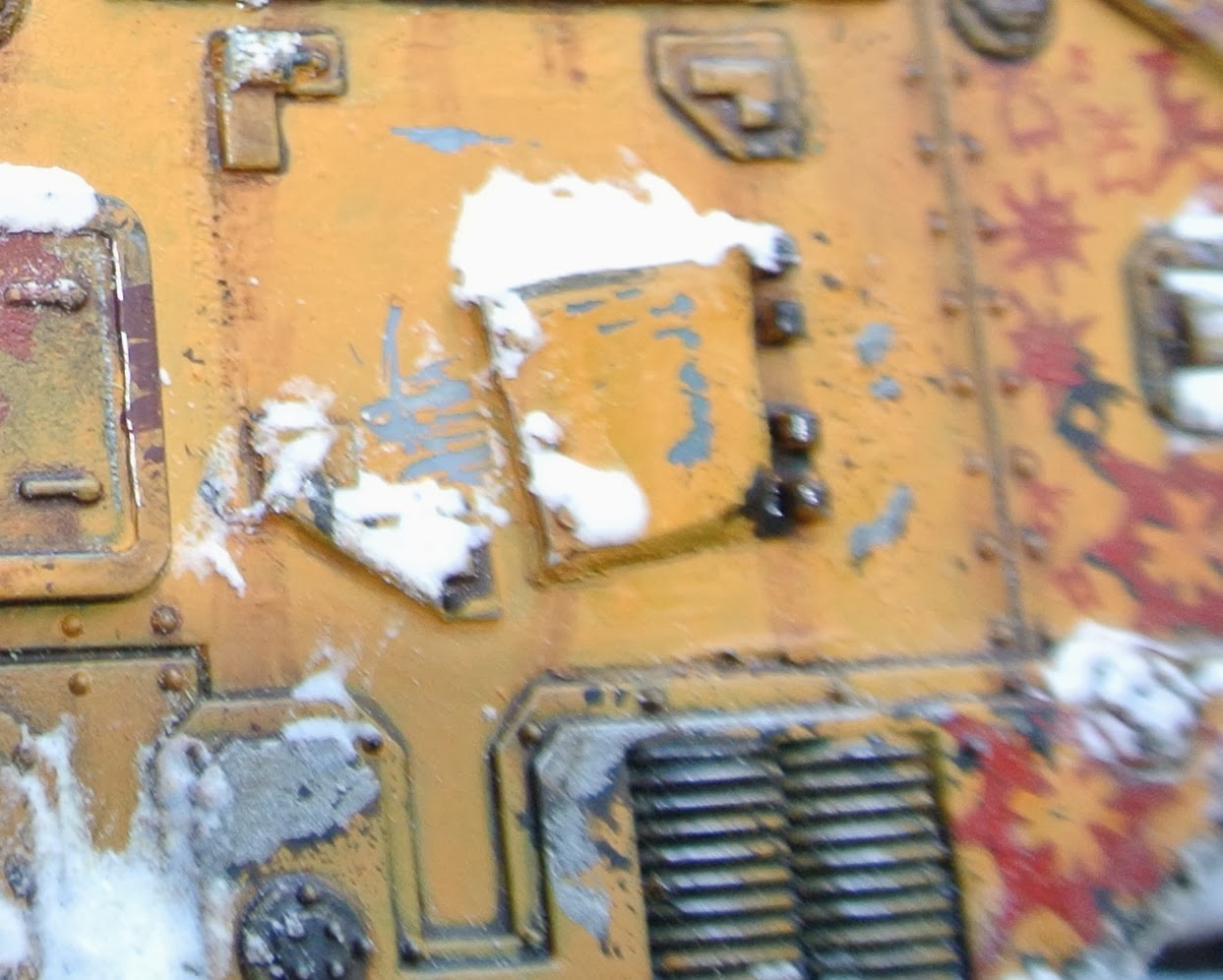 These Ebay Leman Russ's had been assembled in a Destroyer-esque sort of way, with the hull's sporting a battlecannon and a heavy amount of glue! This was the poor plasticard substitute that I cobbled together and as you can see, with a little artistic license you can see the large panel gaps have sort of disappeared. 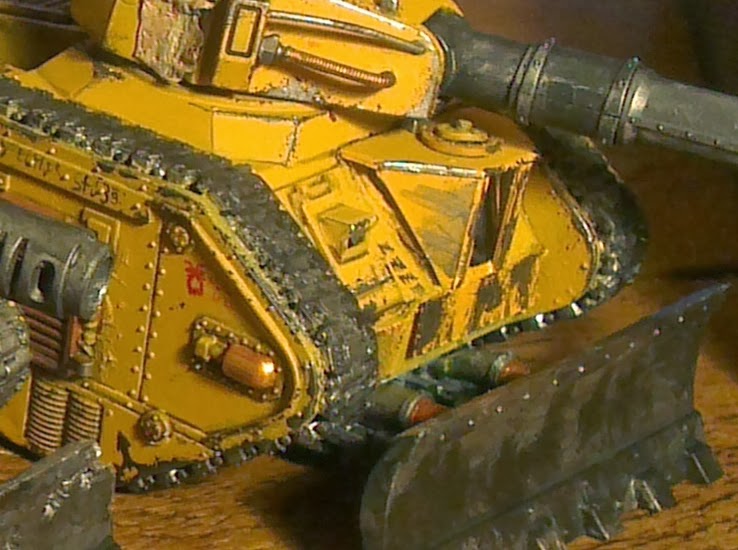 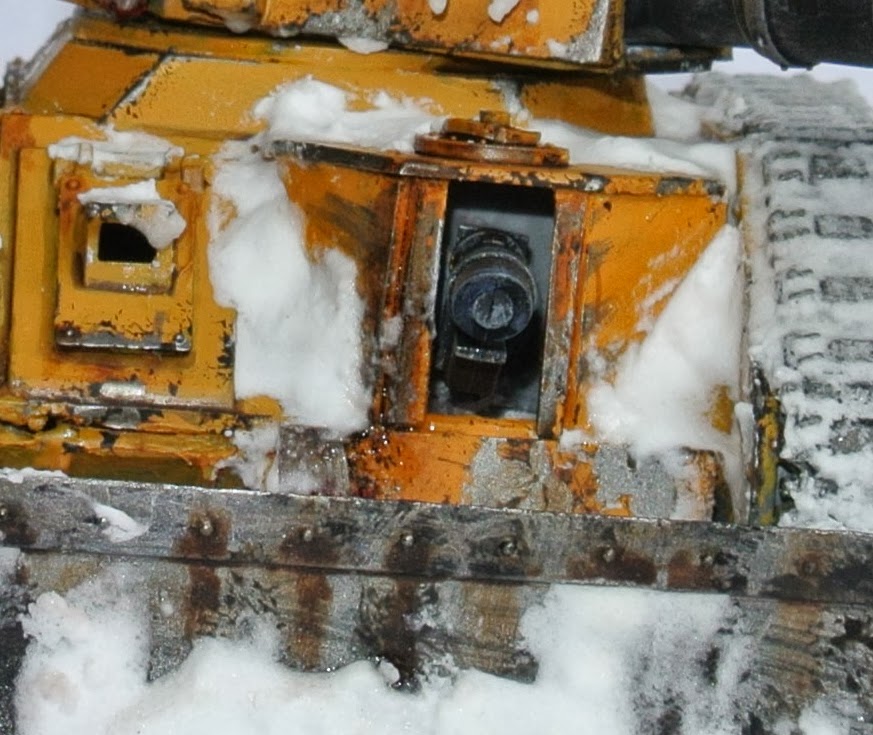 So to the process.

All you need is Bicarbonate of soda, PVA glue, a little water and an old(ish) brush.

Bicarb; Bicarbonate of soda is different to Baking powder, I have seen people indicate the two products are the same thing. I haven't used Baking powder before, and since all my experience is with Bicarbonate of Soda, (which hasn't yellowed in the year and a half of use) I'd advise not mixing the two.

Bicarb is about £0.75 from large supermarkets and the own brand stuff is better than the Dr Oetker products for this, as the grain size of the latter is much larger and doesn't go on as smoothly. This is what you want;

Then I use the cheapest by bulk brand of PVA that I can get (Industrial PVA can be more expensive than child-specific PVA, with little or no difference to be obvious), I went for this 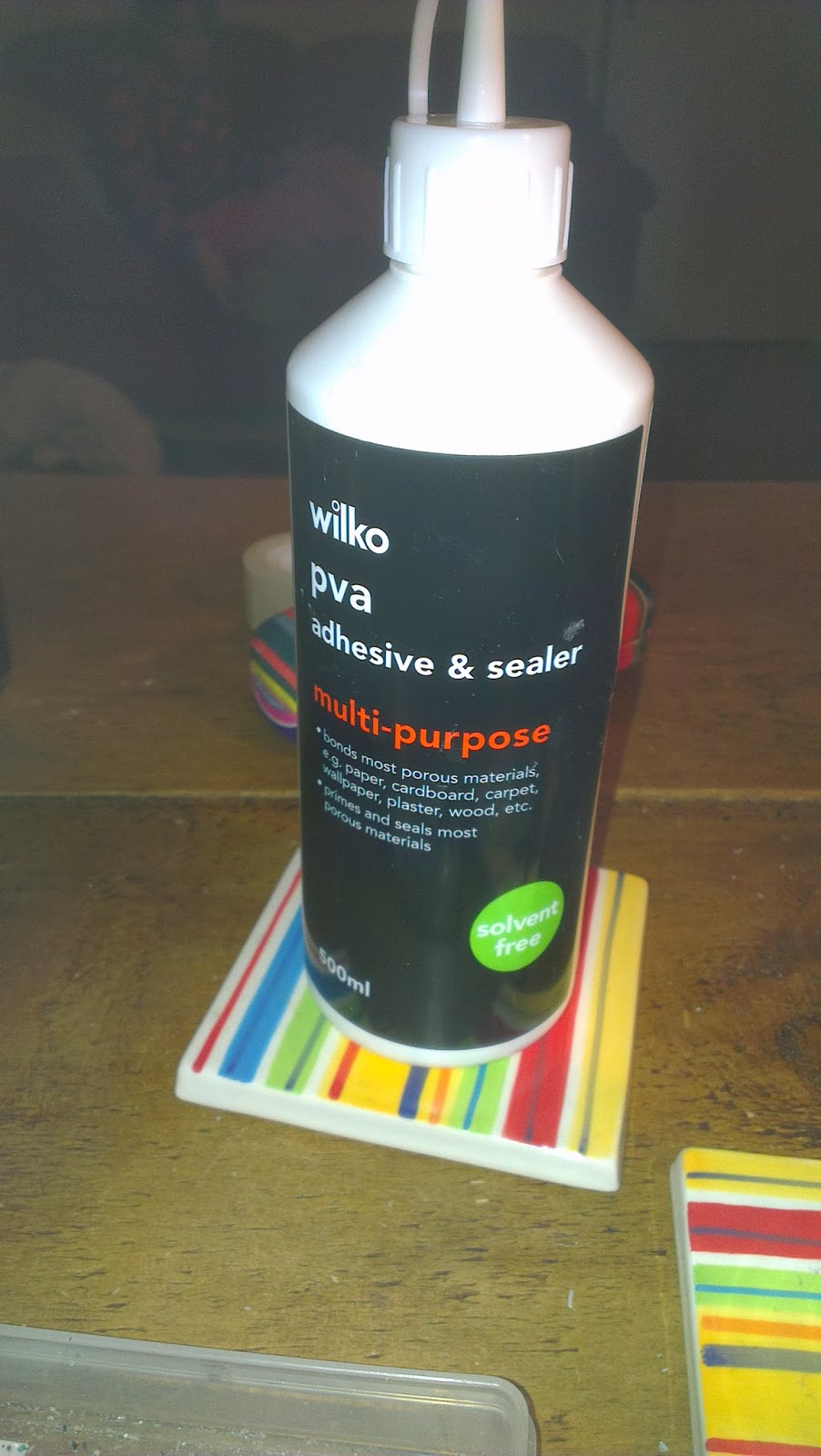 Squeeze a load of glue into a pot, add the Bicarbonate. This should result in a thickish mix, which will clump and bunch rather than mixing nicely, add a spoonful or so of water to the mix to make it smoother,

This should be the result, a consistency close to toothpaste. 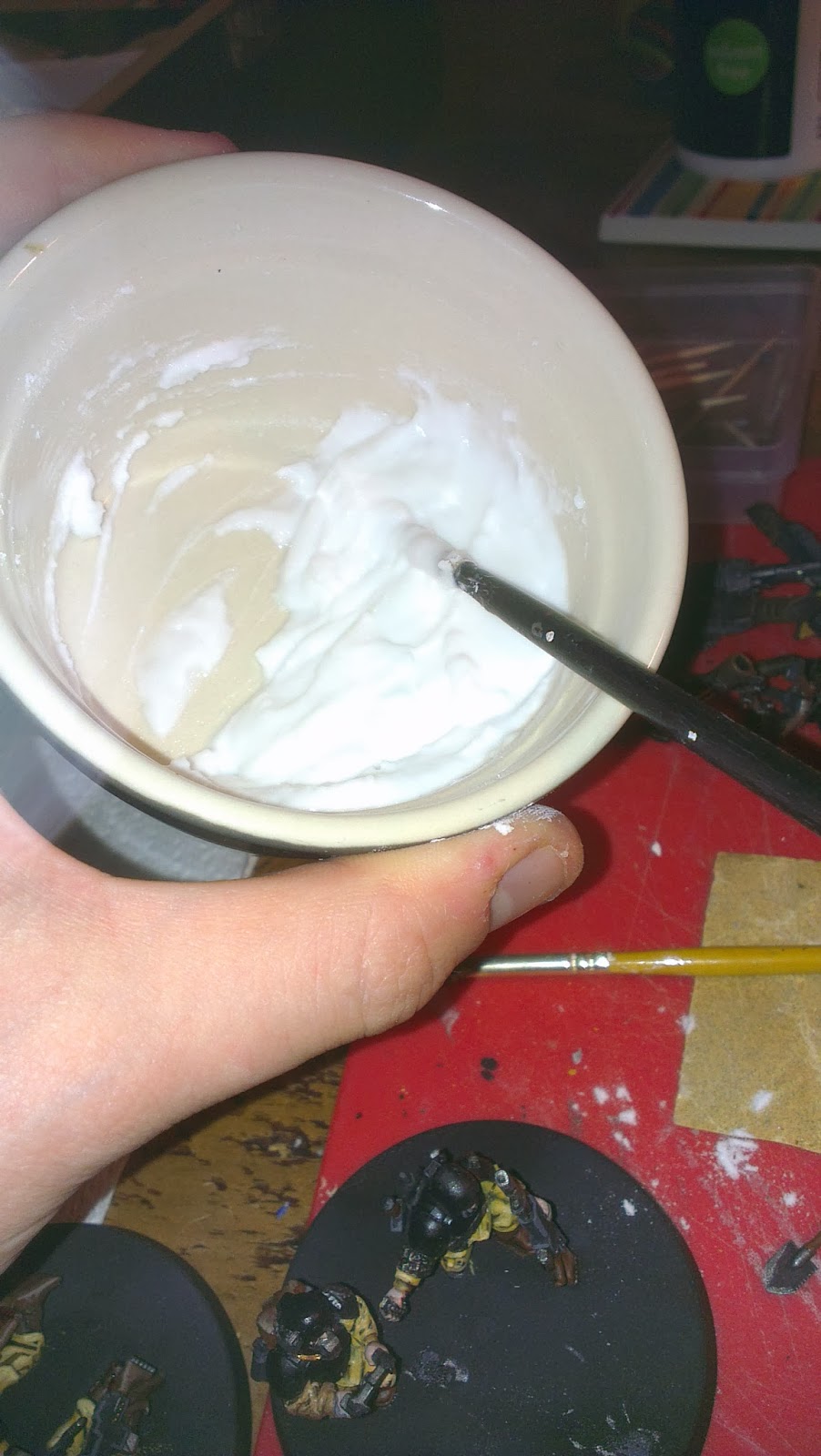 Then just slap it on, use your old brush and poke and prod it onto the base, its fairly forgiving when moving it about so you can get away with bunching it up. Once on the base you'll invariably have some overspill onto the black bases (see below). For this, allow the mixture to dry slightly, and then simply run a wet finger around the edge to tidy it up.

For vehicle tracks, again I use a finger, grab a blob of the mixture on your finger and run it across the tracks. The raised areas that would normally be in contact with the ground will then be clear of snow, so need to be relatively clear of snow as seen here. 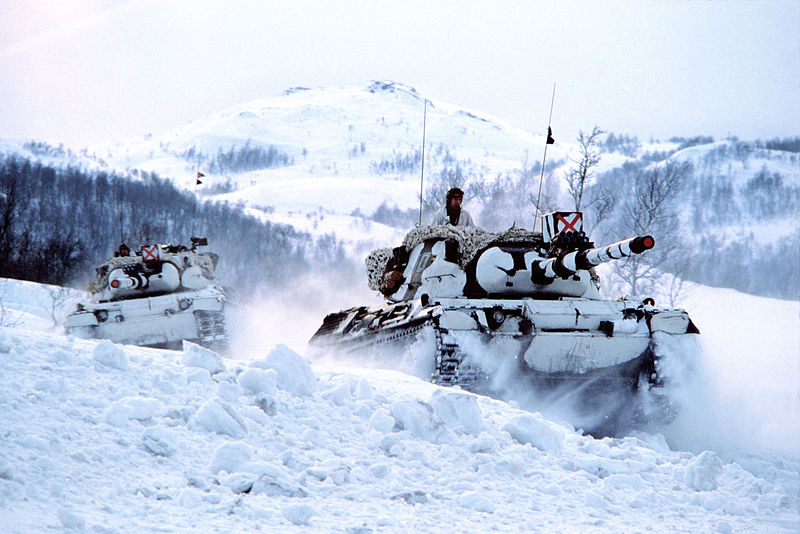 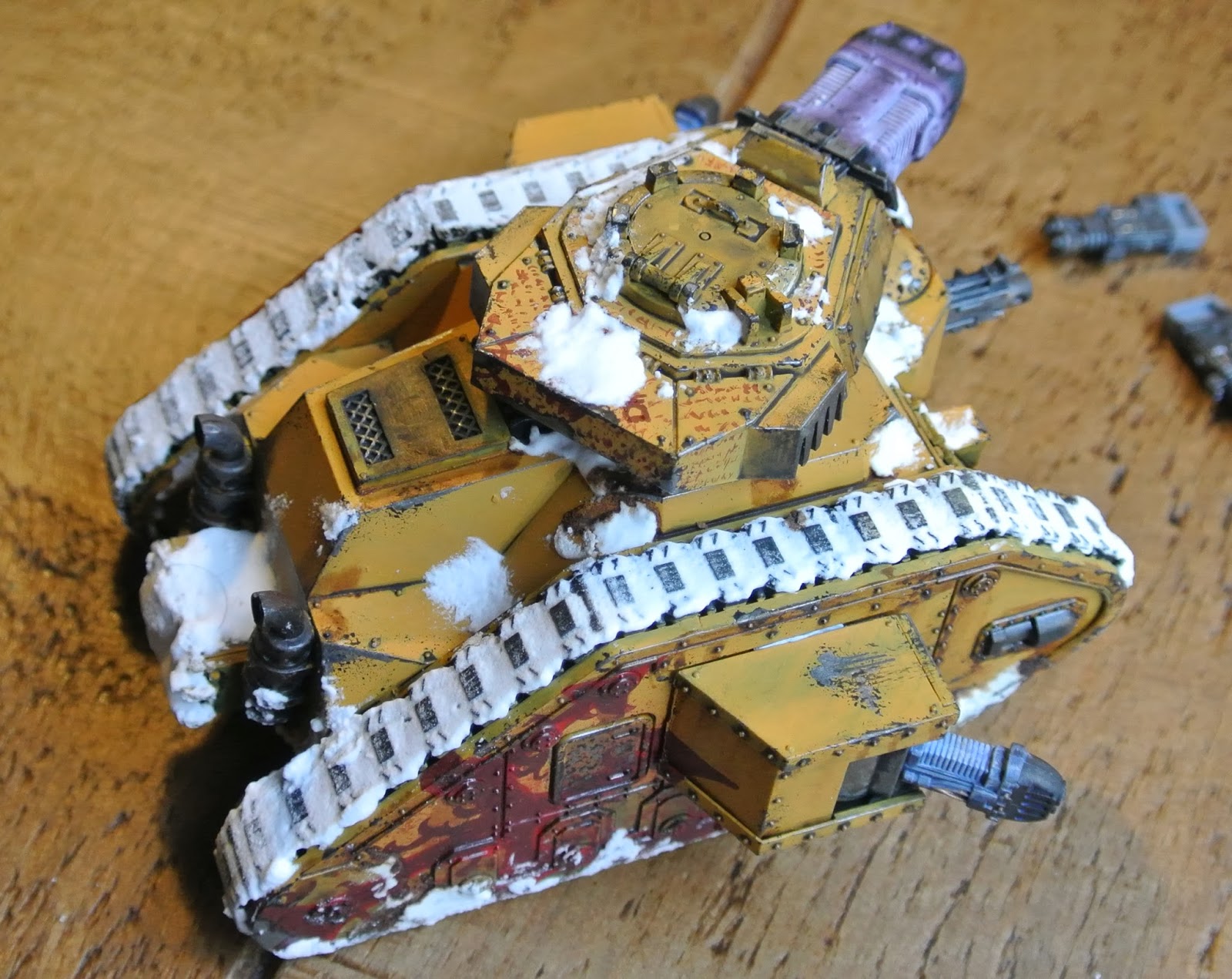 Otherwise on vehicles, I get the hull at the front, and where the snow would collect at the bottom of doors and flat areas at the top of the tank. 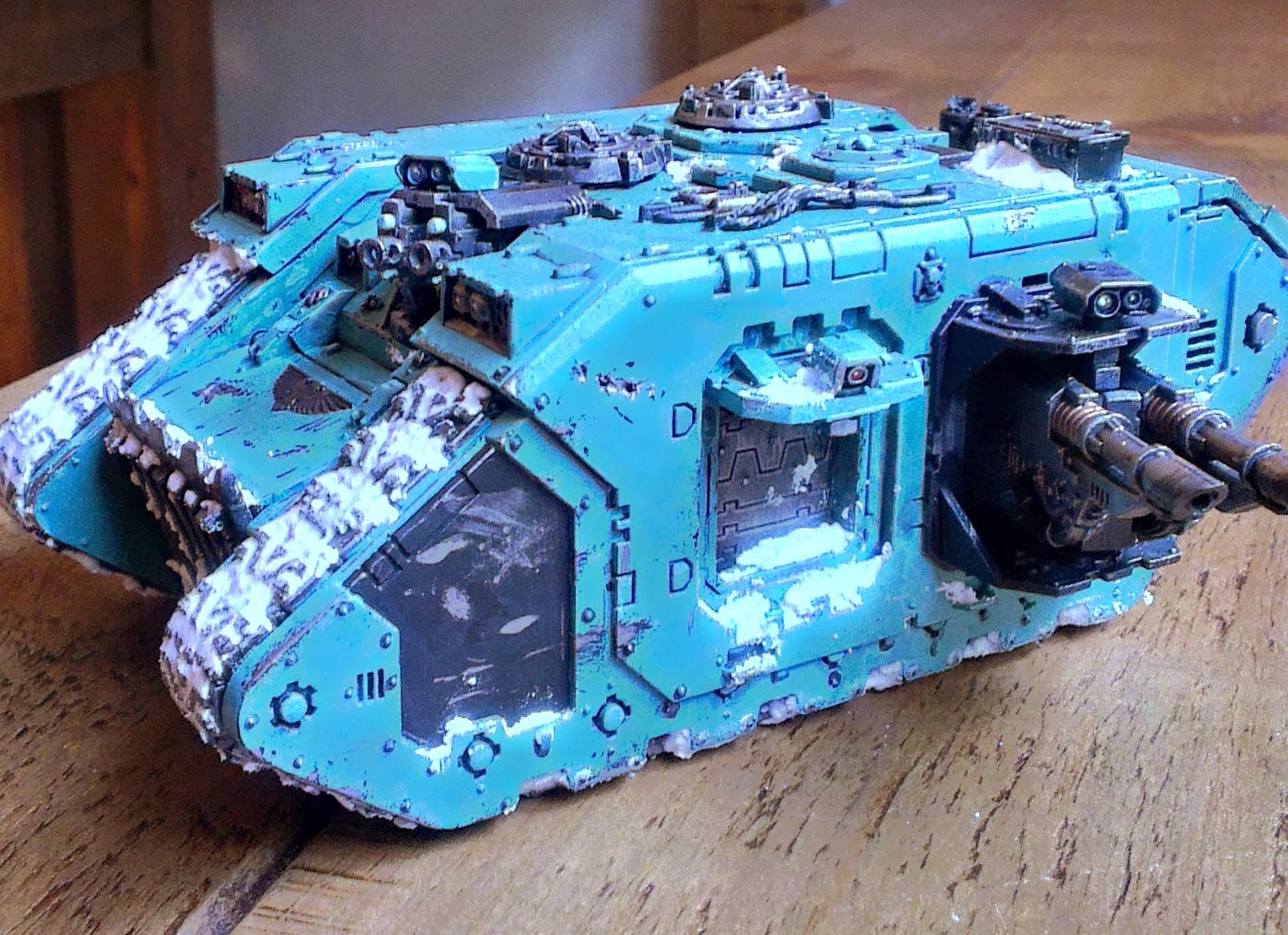 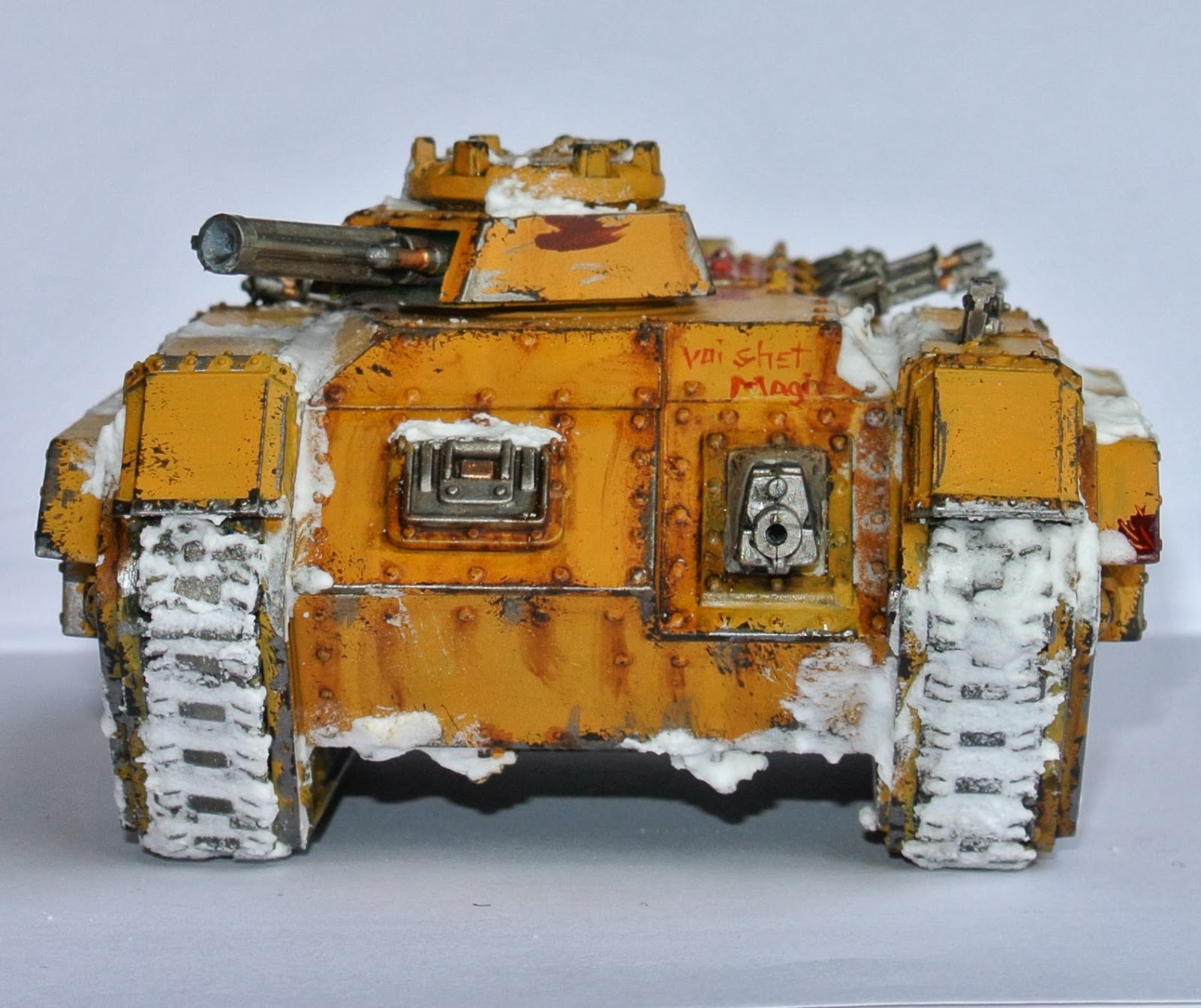 Another good tip for this is to either make less snow mixture than you need (as it will go further than you think) and wait for the next time you complete some bases.

Alternatively, I slap some on terrain pieces to make everything a little deeper, and save on wastage.

Hope this is helpful.

Part 2 of this is here:
http://grudginglyread.blogspot.co.uk/2015/10/tutorial-cheap-easy-snow-for-warhammer.html

If you liked this check out this too, save you more money!
http://grudginglyread.blogspot.co.uk/2014/05/maximising-your-40k-purchases-1-and.html 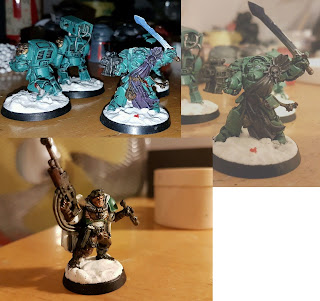