As the article about Snow seems to be extremely popular, I thought I’d make a follow up.

The prior article is here: a simple recipe for making snow bases for Warhammer. It’s a nice read, some good tips, and processes. It’s a tutorial. Obviously, 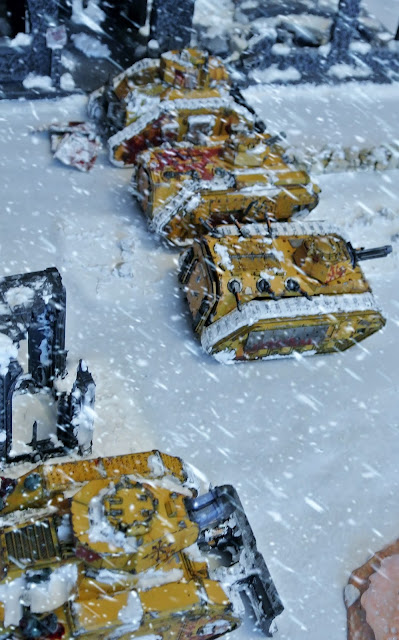 The snow mix that I swear by is simply Bicarbonate of Soda, PVA Glue, and Water. Nice and easy and cheap!

The tutorial covers how to mix and apply but it is brief in its description, it doesn’t address some the factors that I have finessed with this technique lately. So on to Part 2!

Covering feet
Feet are where I devote the least of my time when painting models. And this is entirely due to the fact that I know that the feet of the model are likely to be sunk in at least 1 cm of snow. 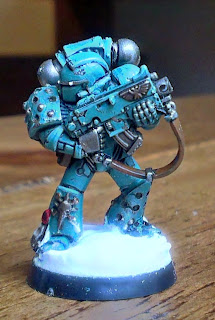 Adding the snow mix to bases is generally a case of going around the edges of the feet, and then prodding inwards, sometimes you get over spill that covers a boot, generally they are bare enough to see the top of the shoes only.

This also helps when you have items on the model that you want to cover up or omit. To get the pose on this Sergeant right, I had to lop his foot off. This was covered by the snow. 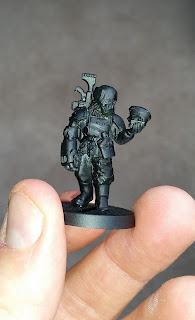 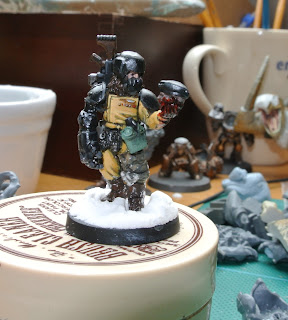 In this model, the chainaxe attached to the gangly arms was large,  too large almost. To cover this up I needed to appear as if it was thunked in the snow at rest. 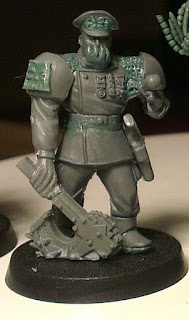 If you extrapolate where the blade actually would emerge, you can see that this goes far deeper into the snow. Does it affect the overall feel of the model? Not really. 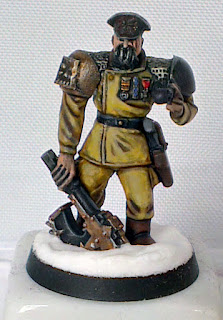 Depth
Infantry are best for representing depth because they bring their snow with them on their base, tanks don’t. A great diorama would allow me to show this, like this excellent example. 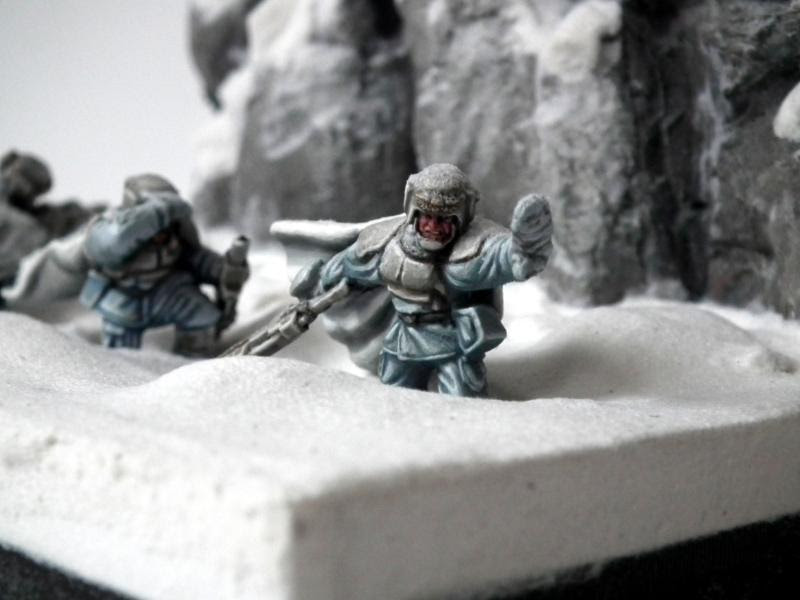 In a gaming context, a deep base just mixes the feel of the squad up more, and variance is key. 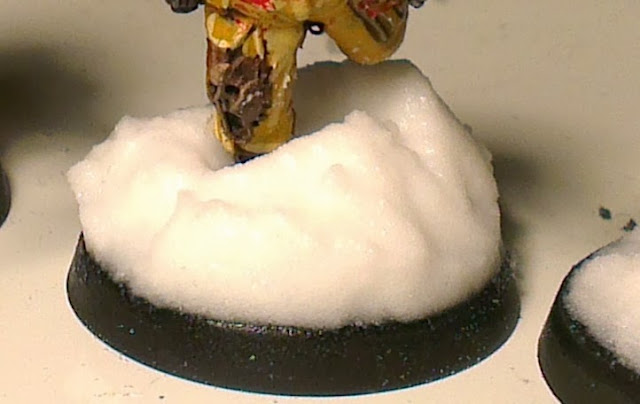 Piling the snow in deeper, albeit as flat a surface nicely represents how the figure would wade through something regardless of depth. Burying items in the snow also adds to this. 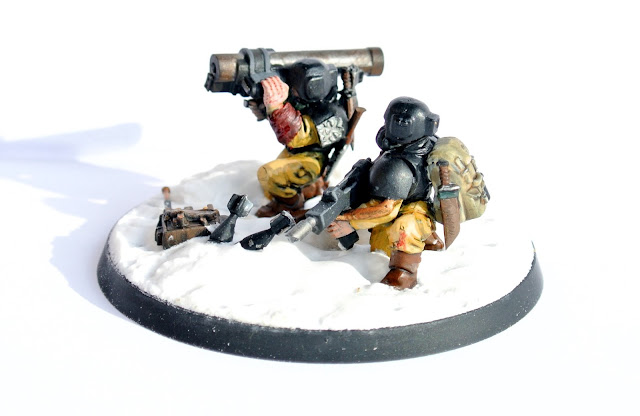 Movement
When moving through the snow, trails should be added a little after the Snow mix has settled. This can be done using the poor abused brush that you’ve spooned the snow on with already. Or instead I use a bit of sprue as the movement is a little more lifelike. 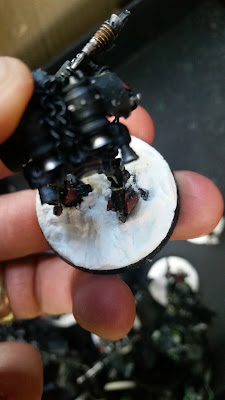 Dependent on the Snow mix these indentations can be soft or hard. 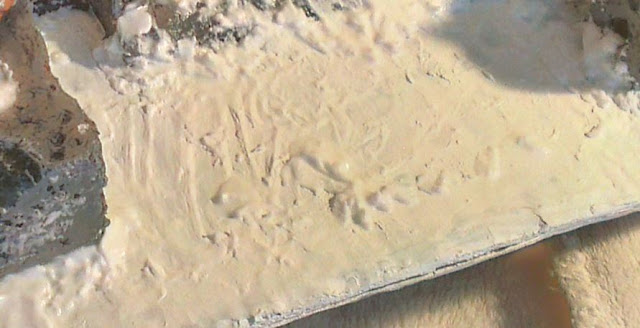 In addition to this, every foot that is raised from the snow should always have Snow across the sole. Whether mechanical or organic, it should always show the adhesion of the Snow on the sole at least. 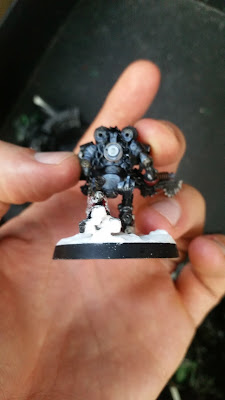 Marrying the figure with the base
Moving through snow means sticking. Snow travels up the legs. Soft army fatigues would always carry the snow with them, mechanical  components less so.

To represent this, dab or brush extra portions on the lower legs and thighs of the miniatures to show the effort of movement, and to merge portions of the model with its base. Here are 2 squads. One without the blending and one with.

Have a favorite? Me too.

Watering that snow mix down may remove it as its in such small volumes, but some will remain. And less is best. 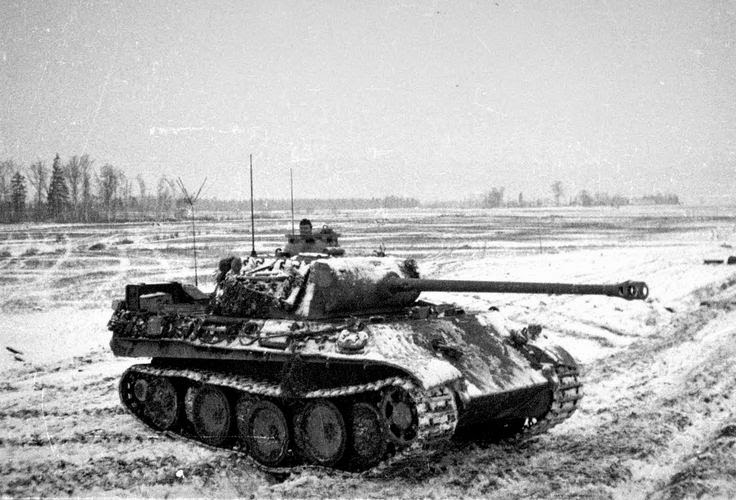 Contextual Snow for tank choices
This is a new one that I wish I’d thought of sooner. It’s snowing. A fast moving Leman Russ is moving through it; expect much snow across it? Bursting through buildings, driving and shaking a lot?

Lots of ‘travel’ snow, i.e. treads and the front of the vehicle. When Snow gathers it does so just past the direction of travel to the rear, when barging through things the front of ploughs and tops of tracks are always clear as well. 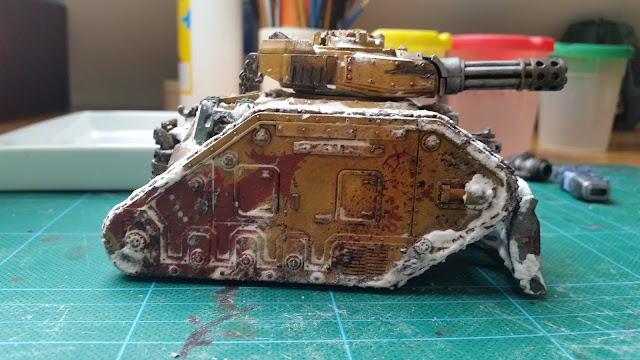 Now how about a Wyvern? Static. Sitting in one place? Being snowed on? Yes, lots. 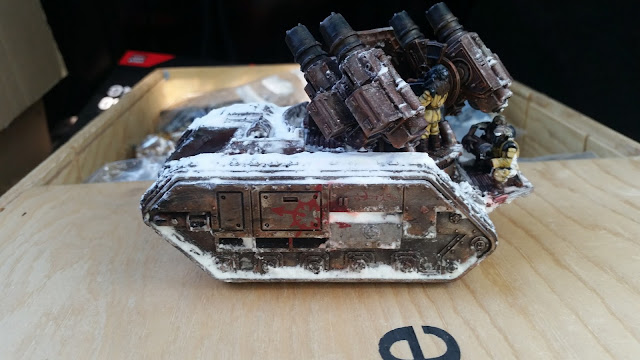 To represent this, slap it on the Wyvern in (uncomfortably heavy) layers and layers. Yes it covers your work. Yes it sucks to waste time by covering it. Does it look better? Yes. It looks realistic. 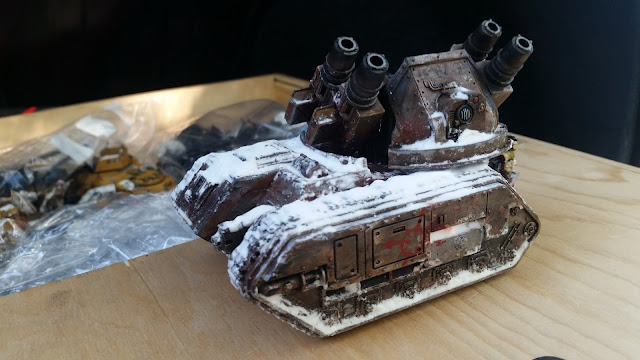 Even the heavy bolter is unused in an artillery vehicle. In the real world these guys would even have added tarpaulins to further camouflage the thing.

Mechanical snow movement
Another late idea that would have been better sooner.  Turrets move, and they move the snow with them. Shuffle the snow away from the turrets by practically moving the turret around and seeing where the snow would be moved from, Copy. 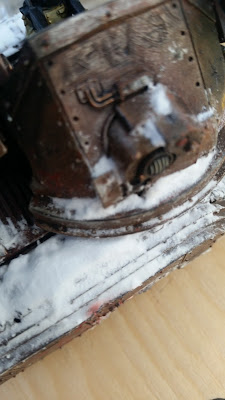 Notice the circle around the turret? Here? 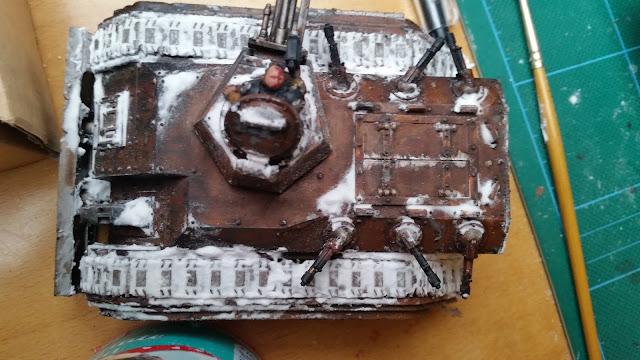 An error on my part on the tank below was showing the blood trail running the wrong way. Tracks move towards the front of the tank. This trail should go in reverse in fact. To cover up, I'll need to add one long trail instead! 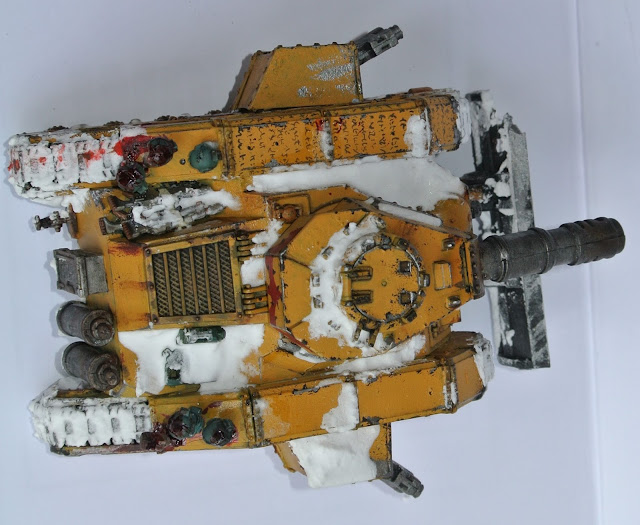 Vehicle heat vents should always be free, anything that will get hot should have no covering of snow whatsoever, and when I get my hands on some water effects I’ll add melting around them as well 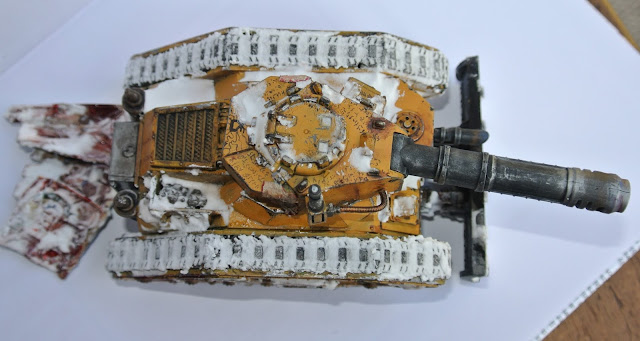 Plasma even more so. 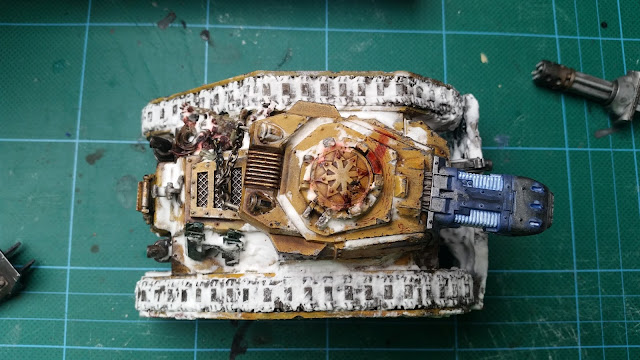 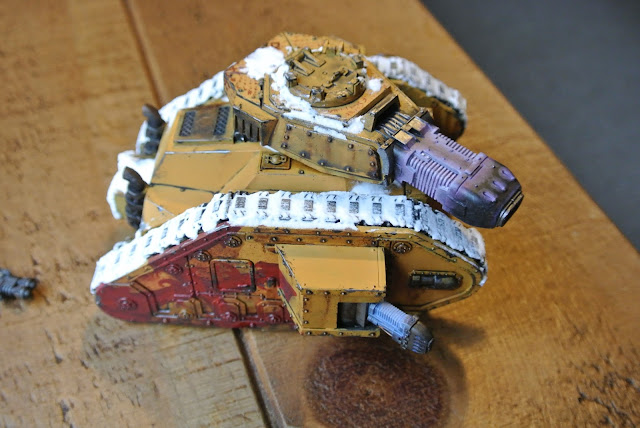 Slap on/Brush off
With the early attempts at snow, I was far too polite and dainty. 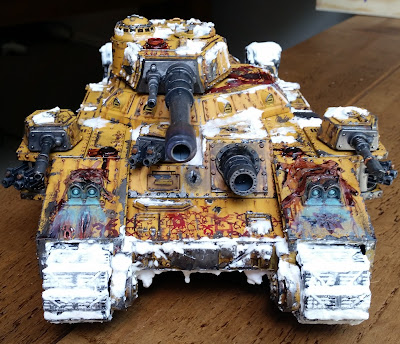 See how little detail is covered by the snow raining upon it. Gathered in little places. Likely? No. This should be how much snow is on a tank of that approximate size. You must be bold.

SLAP IT ON! Don’t be afraid that you’ll lose your work underneath because you won’t.

When dry, PVA and Bicarb come away really easily with an old brush. A flick and its gone. If you want to soften that effect use a lot of water and gradually reduce the covering until you get the desired effect. 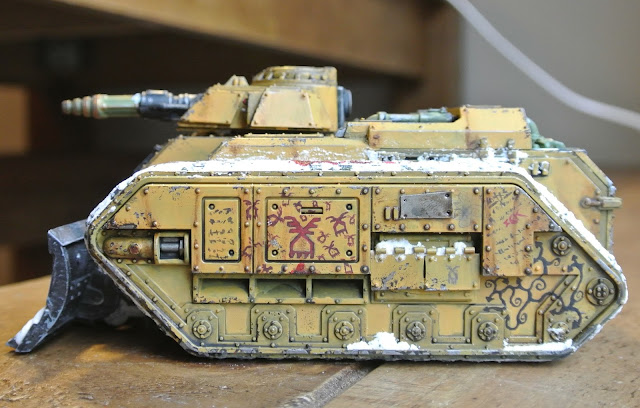 Clear the snow from the detail beneath easily and don’t lose your work.

Bicarbonate Choices
This can make all the difference in the world and its all about grain-size. I have no idea of the complexities of what makes up bicarb, I don’t intend to. However, I do know that there are very grainy brands, and very fine brands. Pick which works for you.

I prefer fine, as I find that its scale matches 28mm better. For slush and watery snow, large grain size is just more realistic.

Varnish
This is entirely personal choice. When I have too much fine snow on the model I generally blow as much away, and then spray with purity seal to hold the remaining snow mix in place.

Hairspray works fine for this too and is far cheaper, but lacks the protective qualities of Purity seal too. When I get the opportunity I will be trying water effects on the snow too to see what enhancements it brings.

Water run
When you add a lot of water to the mix, the Bicarb components can pool in seams, and can spread across the miniature in unlovely splodges, these I wipe away when dry. Sometimes vertically this looks nice, in a flat plane it looks terrible. 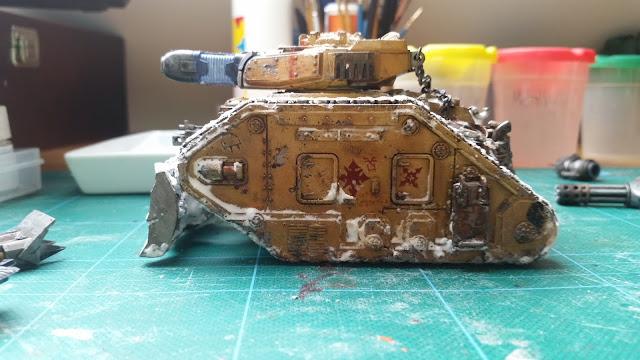 Leftovers
You will always get leftovers of the Snow mix. To get the mix right you will always be adding more of one of the ingredients as you cant remove it. That means excess! 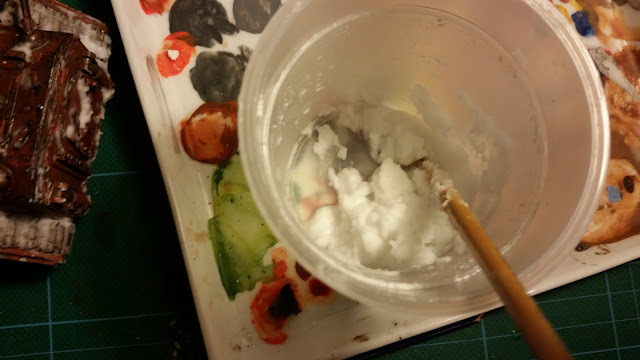 Rather than getting rid of it completely, I stick any remaining on scenery items. 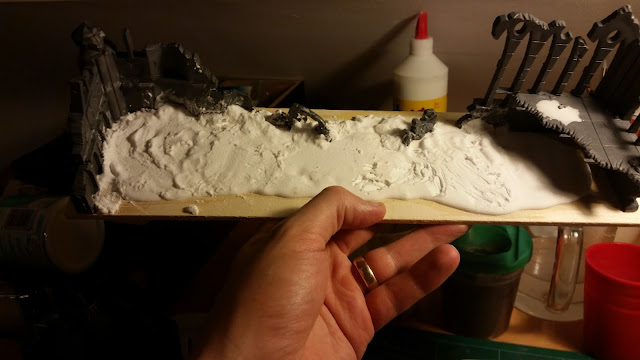 This has been on my desk for around three months, and I have been periodically adding more and more snow to more and more areas as I go. As its bunched up it looks fine. Better this than throwing away! 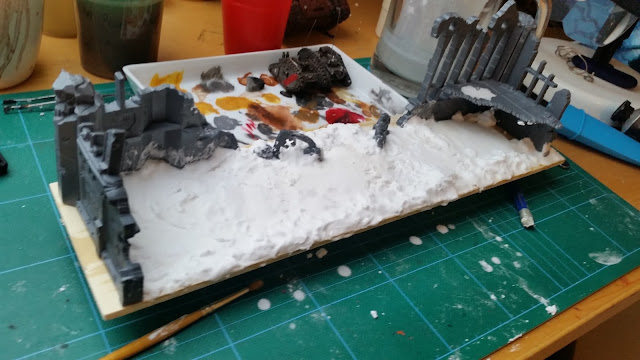 I hope some of those extra tips have helped, as I find working with this stuff to be a constantly evolving process.

If you have any please do add them in below!